Press briefing by CAN Intl. – Expectations of COP 22, Marrakech 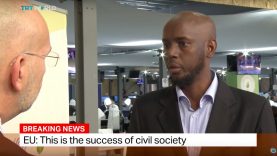 In an update on state of negotiations between countries regarding Limiting the Effects of Global Warming and Climate Change, in terms of addressing and finalizing all aspects of the text towards the 2015 agreement, Mr Mohamed Adow,(Snr Climate Change Advisor for NGO: Christian Aid ), gives his views and commentary at COP 20, Lima.

Positive news received very recently, was that there had been an intervention from South Africa on how to move the 2015 Agreement forward, however, between the countries that are negotiating, both developed and undeveloped, countries are divided on the required process for moving the party agreement forward, this is just a symptom of the underlying political problems that already exist. Countries fundamentally disagree on what they want out of this agreement, there’s no clarity, with some rich countries wanting an optional ‘mitigation focus agreement’ that does not include a review process (science-based equity review process that will assess the adequacy and fairness of their contributions) – while developing countries want a comprehensive agreement that will include, i.e. finance for poorer countries and adaptation to global warming, it’s a bit like the 3-pole ‘teepee effect’ – with the mitigation pole being much longer than the other two for adaptation and finance, which will surely result in failure of the party agreement.

In order for the parties to get back on track, firstly, parties must address the underlying issues and agree on the elements that they will include in the agreement, and secondly, they will have to agree a review process that will help ensure their commitments are both fair and adequate towards a reasonable resolution between parties. We are expecting a ‘white paper’ from these negotiating countries that will include the elements which clearly lay out the options that were explained to the ministers when they arrived here, the decision that they need to take, in order to facilitate the road to COP 21, Paris.  The 2015 agreement is in the drafting process and to be able to effectively tackle Climate Change, we would need the greatest amount of mitigation cuts that countries can mobilise, as well as the ‘science based equity review process, which is not in the agreement text.

There is no confidence on the part of the developing countries, particularly the African countries, that adaptation is currently adequately captured in the agreement text.  What needs to happen, the countries need to elevate and adequately reflect the concerns of the most vulnerable countries, who are already suffering the impacts of Climate Change, by way of having adaptation adequately addressed.